Anthropogenic climate is defined as the change in the global temperature and weather patterns which have been brought about as a result of human emissions of greenhouse gas waste products into the atmosphere. This phenomenon is now only disputed by the most ardent climate change deniers.

The causal effect of the green houses paints a complicated picture but we, as a human race must take responsibility for its effect.  All but a few of the least developed countries on this earth produce significant amounts of these harmful greenhouse gases. The total amount emitted is a function of amount produced per person and population size. What is nearly certain is that human civilization must develop less harmful ways of meeting its energy requirements if it is to avoid Armageddon.

The media reports frequently on the melting of icecaps and the disappearing Lake Chad, but we hear less about the effects of climate change in areas of the world which until recently, had stable agriculture practices such as countries located in the Fertile Crescent.

In 2006/2007 Syria, a country which had 2 years prior to this time had just attained food security, suffered its worst drought on record (Study3*). This drought is believed to have been attributed to climate change. The significant failure in rainfall, exasperated by increased surface temperatures brought about the eventual crop failure. This had the knock-on effect of forcing 1.5 million farmers to abandon their land and move into Syria’s all-ready overcrowded cities. Add to this turmoil, Syrian population growth, the administration breakdown of the Assad regime and over extraction of groundwater, then it becomes easy to imagine how the ensuing civil strife and tragic civil war emerged.

Hence, it is logical to assume that anthropogenic climate change and Syrian overpopulation could quite well be considered significant underlying factors which drove Syria over the brink 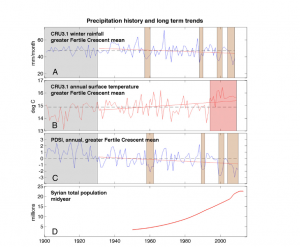 Anthropogenic climate change is also having an effect on the monsoon rains which is the life blood to more than 50% of the world’s population. The pattern of monsoon rains have become noticeably more erratic in recent years, a phenomenon which is now attributed to climate change. Although a comprehensive hydrological 100-year study1* concluded that there had only been an 0.3% decrease in rainfall over the whole of India some locations in are now subject to greater periodic flooding whilst other Indian regions experience harsher droughts than would otherwise be normally expected.

A notable example of this Indian monsoon variance is the region of Western Maharashtra where farmers have suffered from excess monsoon flooding whilst in the Marathwada and Vidarbha regions of this same state have experienced prolonged droughts since 2011. Certainly, this same scientific paper1* supported the fact that climate change could be the major factor in these recurring droughts. The records showed that Vidarbha had experienced a 5 to 10% reduction in annual rain precipitation over a 100-year period. These repeated droughts meant that many farmers faced financial ruin as a result of losing their crops and between January and July 2019 a recorded 1,300 farmers took their own lives (in 2018, there were 2,760 recorded suicides). Studies carried out in 2014 showed that suicides to be greater amongst those small-hold “cash crop” farmers (1 hectare and less), who took loans for seeds and fertiliser from banks or money lenders. When the crops fail for 3 to 4 seasons in a row, they build up debt which become impossible to payback.  This problem of suicides had been going on for some time as the Bureau of India reported that a total of 296 thousand Indian farmers committed suicide since 1995, of which 60,750 farmer suicides were in the state of Maharashtra. 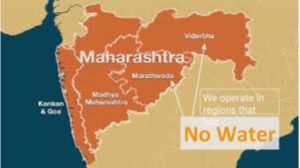 Water is the most fundamental and imperatively importance resource to India. Constraints in its supply limits economic and social progress. The water shortage crisis has become a major political flashpoint as it is now widely reported that 21 cities in India could run out of water in 2020.

Some of the facts reported by the Ministry of Jal Shakti on water are revealing. In 1951 the availability of fresh water in India was 5,000 m3 per person but by 2014 this figure had dwindled down to only 1,500 m3.  Some of this very significant decrease is due to the fact that India’s population was 383 million in 1951 whereas today it is a staggering 1.38 billion.

Droughts are not the only effect of climate change. India’s longest heatwaves ever experienced have occured this century with the highest temperature of 51OC ever recorded in India been registered in Rajasthan in March 2016.  Increases in temperature not only takes a high human death toll but also has a huge impact on agriculture with crops like rice, wheat, maize and sorghum worst hit by this phenomenon. The crippling effect that climate will have on agriculture is a hotly debated topic in India but one New Delhi experimental based study2* reported that 1OC rise in temperature throughout the growing season will reduce wheat production by 5 million tonnes. This is probably only a taster of things to come.

The lesson that the human race must learn before it can even hope to achieve sustainability is that if we do not significantly reduce our greenhouse gases emissions then damaging effect of anthropogenic climate will only continue to worsen as many developing countries will also strive to improve their standard of living.

Although Population Crisis acknowledges that there is an urgent need for us to all to do more to reduce our emissions of greenhouse gases, it also acknowledges the impact that global population numbers is having on climate change.

5. Blog Picture: A boat is repaired on a tiny island formed after high tide rolls in, encapsulating the simple yet Sisyphean struggle of staying above rising sea levels. Taken by Arko Datta in Topic.com   “Disappearing Acts in World’s largest Delta”.